How to ReExpand your Comfort Zone 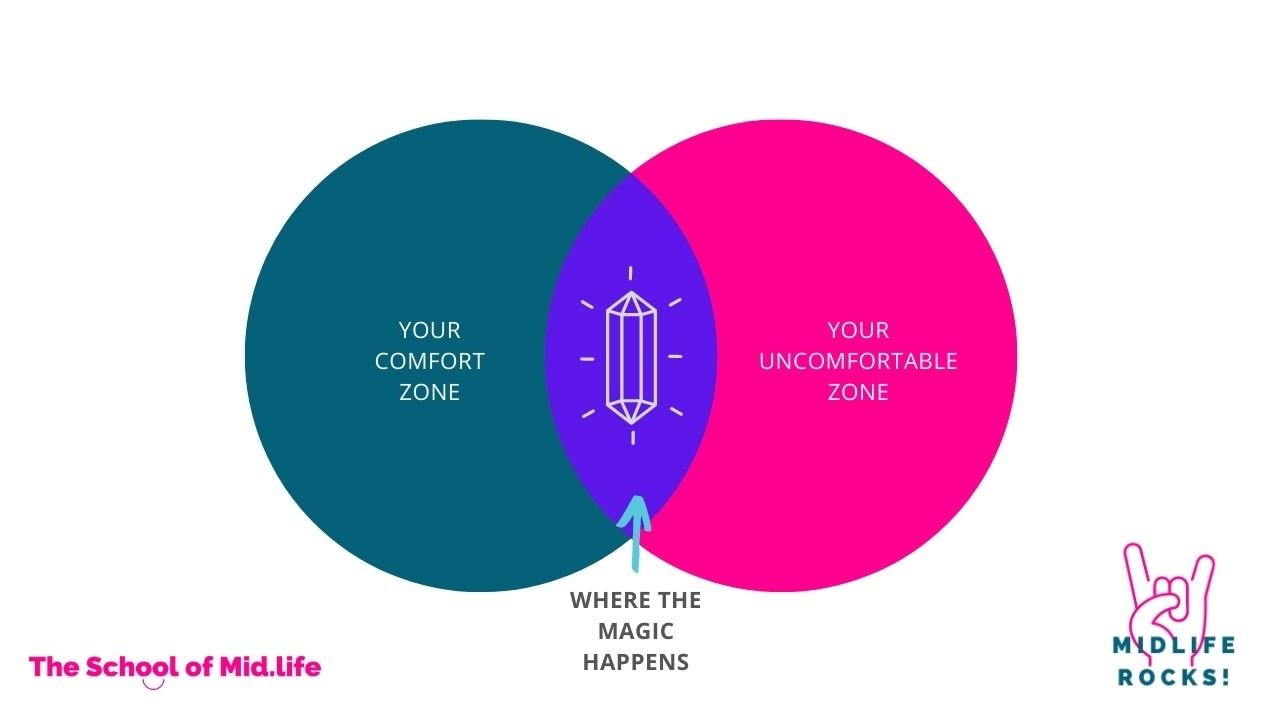 Step out or get out sounds a bit scary. I decided to stomp out of it in style with my flamenco shoes, ReExpanding my physical and mental capability.

I used to be quite a daring young whippersnapper in my early twenties. Carefree and a little chaotic. Staying on uninhabited islands off the Australian coast with nothing but a tent and some water, heading off to Bulgaria on holiday after Tschernobyl belonged to my repertoire.

And then I got older and had children. Teenagers stretched my comfort zone in a very different way both emotionally and physically. So much so, that I don’t think I even had the energy to ReExpand any zone at all. I felt zoned out. Work was stable. No big changes.

When it came to creating some space for myself whilst on my o.R.g.y at home (which was not then entitled an o.R.g.y), both music, dancing, as well as singing karaoke Asian style were high on the list of what brought me joy. Not that listening to me sing brings others joy, but that’s another story…

I’m one of those dreadful women who like to lead and take control when they dance, so flamenco instantly came to mind. You can dance on your own and it was something I’d always wanted to try out, ever since seeing my first show back in Spain at the tender age of seven.

I was off to discover my inner gypsy as my sound healing buddy, Wil pronounced.

Anyway, serendipity stepped in and upon searching “flamenco Singapore”, Google pronounced “an intensive 5 evening workshop with a flamenco maestra from Madrid” would be happening in 1 week’s time.

“Hola” As a complete newbie to the flamenco foot stamping lark this would be the test – it’s now or never. So I signed up!

“Wow, you’re so brave. The first time you’ve ever danced flamenco and you’ve come on your own.” Rachael commented on upon introducing herself. Rachael was the poor girl who had the misfortune of being next to me during the first class.

I smiled weakly and thought quietly to myself that she too was incredibly courageous. She valiantly withstood my diabolically uncoordinated feet and flailing unhinged arms which nearly slapped her into a state of unconsciousness on several occasions.

Here’s the jolly tune we did our flamenco number to “Chopin-Flamenco”. Warning: it’s quite contagious, especially when listening to out and about. Watch out for foot stomping at the supermarket cheese counter and practicing hand and finger twirls on public transport… Hola!

Wow – I had overcome my fear and ReExpanded my comfort zone. It felt good and I started to wonder why that was.

Maybe it’s because I went on my own. Nobody knew me and that felt freeing. Not brave but free!

I tried out something where I could look a complete and utter pillock. Which I did. And I didn’t worry about what other people thought, probably because they didn’t know me. That helped me to let go with gay abandon and enjoy myself.

There were no expectations. It was a master class and nearly everyone else was a damned sight better at this flamenco lark than I was.

Tanja, the Singaporean flamenco teacher, gently encouraged, never pushed and was terribly patient. Being able to let go and laugh at yourself is also a pretty good prerequisite!

Attitude, in Paloma’s words at the second class, was what that flamenco was all about. Paloma, the maestra from Madrid, said I showed it. I was dead pleased. I have attitude. My mother would probably agree.

I kept muttering the mantra, that 3 lettered growth mind-set word used in the third person that I always chant when coaching clients: “Lisa, you are not good YET”.

And then on wondering how long it would take me to get better, my friend Google came to the rescue. Normally I’m pretty OCD when it comes on researching stuff before diving in. This time I had skipped the research bit and jumped straight in. In hindsight, that was maybe the right strategy. Otherwise I may have got stuck in analysis paralysis. Or worse still – completely put off.

There’s nothing like going to watch the professionals in action to get inspiration. Corral de la Moreira is the place to go. Being on the list of 1,000 places to go before you die and not knowing when that will come, I decided to try my luck…

Also, the latte-macchiato eyed Omar, our charming hostel receptionist, had suggested it was the best spot for real flamenco.

Greeted at the door of Corral de la Moreira with “Hola, Lisa” – how did they know it was me? – the dashing host quickly seated me and after ordering some “Aqua con gas” (only in Spanish could sparkling water sound so sexy). He asked breathily if “that was all I wanted …”. “Well for now, yes thanks” I replied, somewhat flustered.

Kick off: the intimate restaurant was packed. My table neighbour spun round in her chair, said cheers and inquired if I was on my own. Answering yes, she asked why.

Now here’s the dilemma. The flamenco show was about to continue. So how to explain my o.R.g.y amongst the rapidly stamping of feet and clicking of castanets… Hmmm. I was stumped. I decided to respond simply with a smile and a “Why not?”

It transpired that Nadja was from Kirgistan and Georgi - her rather sullen looking husband with piggy eyes – was less than enamoured by his wife’s voracious enthusiasm for flamenco.

It turned out she dances too. Looked like she could do with a solo o.R.g.y, I mused.

“The flamenco is the explosion of feelings expressed by your subconscious, these rhythms unfold into experiences without awareness, something which I personally consider to be a form of discovering oneself.”

I guess that’s Spanish for “flamenco gets you to ReExpand your comfort zone”!

Learning Spanish had been on my dream language list since my high school “A” Levels. The polyglots amongst us could take another language at “O” Level. Alas, Spanish was to remain a dream for over 30 years. It didn’t fit into my timetable. So I took Russian instead. Russian totally shook me out of my comfort zone. It was the first exam in my life that I failed. But I digress.

Back to Spanish and on to the the hiking trail. I’d heard that travelling solo takes a while to get used to. I threw myself right into the bliss of wandering through Valle del Nansa, near the Picos d’Europa mountain range in Northern Spain, with a stream tinkling in the background. No nagging “How much further?” (actually, full disclosure, that’s usually my question) or “Hurry up…”(usually accompanied by duck quacking sounds from Boo or TT, my teens).

Not to mention the complete and utter indulgence of being lost in my thoughts and pondering life for 17km.

Oh, the joy of loudly conjugating newly-acquired Spanish verbs, laughing at myself as I went along. Typing these words that I wrote back then take me back to that moment. Being fully present and…oh wait.

It also reminds me of the disadvantages of solo travel. Having someone stand guard whilst you take a pee in the forest. Worrying about screaming “help” in Spanish, because you failed to write down the word on your hand to remind yourself…

I felt accomplished as I shared directions in Spanish with fellow hikers who had got lost. Not that I really knew where I was going. By simply sprinkling digital breadcrumbs of signs and sending them to people who may actually care, should I not reappear, I was ReExpanding my comfort zone.

Little did I know the following two days were to take me way out into the panic zone. No amount of mindfulness meditation helped me to prepare for my lizard brain to be on such high alert.

In my dorm bed, I lay frozen. Not from the cold but from fear. Maybe irrational fear. Maybe not. But my amygdala did not care. She was not prepared for a philosophical, pro and cons discussion about the Malcolm Gladwell “blink moment” I’d had two hours previous.

I bumped into one of the guys sharing the dorm room. The whole of Spain was on holiday in August. Even more so then, as it was a long public holiday weekend. There were no rooms available anywhere, so I took my chances and check in to the local surf house dorms.

They other guys looked OK. This one dude looked muchos creepios.

I hardly slept a wink that night. Perhaps the sound of my palpitating heart kept me awake. Or maybe it was the fact my feet were sweaty. I was sleeping with my sneakers on, so I could make a quick get away if necessary.

I made it through the night. But it was a lesson learned: no mixed dorms from now on.

I shrank back into my comfort zone. The following day would be better. I was sure.

Never, ever trust Google Maps promise of “save 8 minutes”

You know those days you have a plan and it’s all mapped out nicely? And then that creeping feeling comes over you that it’s not going to work out as you’d imagined? 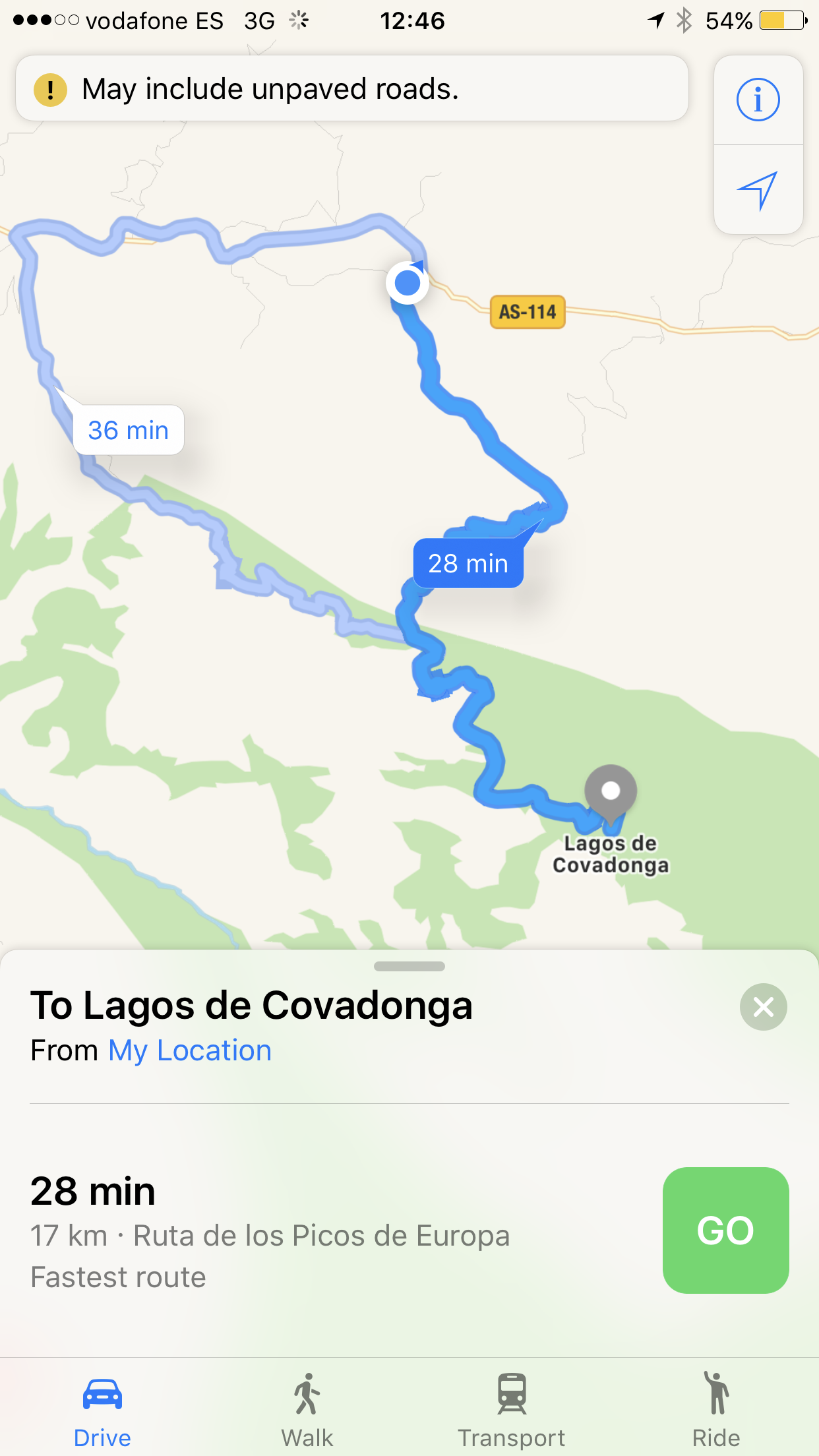 As the road narrowed and the turns became more hairpin, I started praying that nothing would come from the opposite direction. Haha. Wishful thinking. For one whole hour the only other sentient beings I encountered were cows grazing. 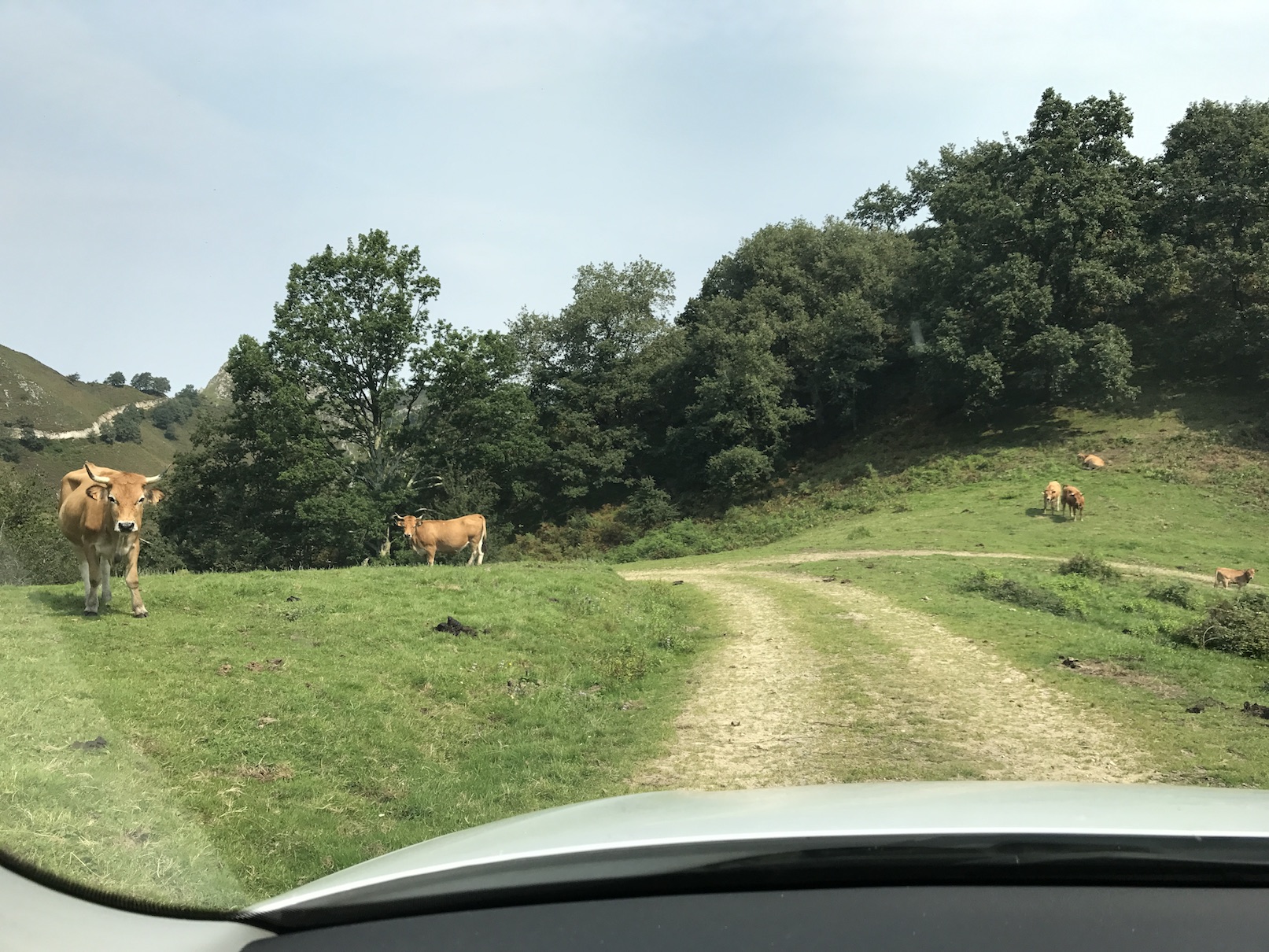 The views were breathtaking, almost hyperventilatingly so. Being stuck at the top of Picos de Europa on a dead end road, in a field with the cows – I now knew where the word breathtaking came from… I hardly had any left, so busy I was with pooping my pants.

My intimate conversation with fear

Recalling myself, I breathed deeply and started a deep, inner conversation:

Me: What goes up, must go down.

Fear: Hey, but you could die. Have you seen those dirt tracks?

Me: Lisa, you’re a great driver. You’ve been driving for over 30 years.

Fear: Yeah. But do a video first. In case you crash, so they’ll know what happened.

Fear: Cool. Just keep those feet firmly in control of the pedals.

Me: Yes, Fear. All will be fine. Just might be a bumpy detour. We’ll get down for lunch though.

Fear: Good job those Spaniards have lunch from 2-4pm haha! (it was a nervous laugh, yet fear had relaxed slightly).

Passing the cows (again) we swung a left…

Me: This is great. The unpaved roads are now concrete. Oh, now they are asphalt.

Fears: Don’t get too excited now. Things could change you know. You said this 30 minutes ago too.

Me: Don’t worry. All will be fine. (one of my life mantras taken from my German friend Rita’s saying “Alles wird gut”)

Fear: OK. OK. But don’t get too cushy. Keep focussed.

Me and Fear: (in unison) yay – a signpost

Fear: You know, Lisa. That was pretty impressive how you got the car down that mountain track. I didn’t even crap my pants.

Me: De nada, Fear. Me neither. Let’s head for lunch.

We’re curious to hear about your stories of how you're ReExpanding your comfort zone.

How often do we hold ourselves back because we don’t have someone to go with?

Or we feel awkward because everyone else is far more advanced and expert? Or simply fear of the unknown?

Share your story here in the comments. Find out more and join fellow middlescents at The School of Mid.life now!

Stay connected with news and updates! 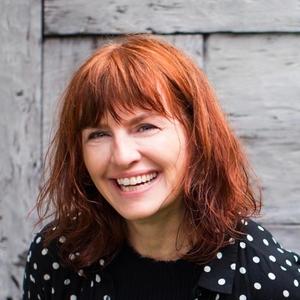 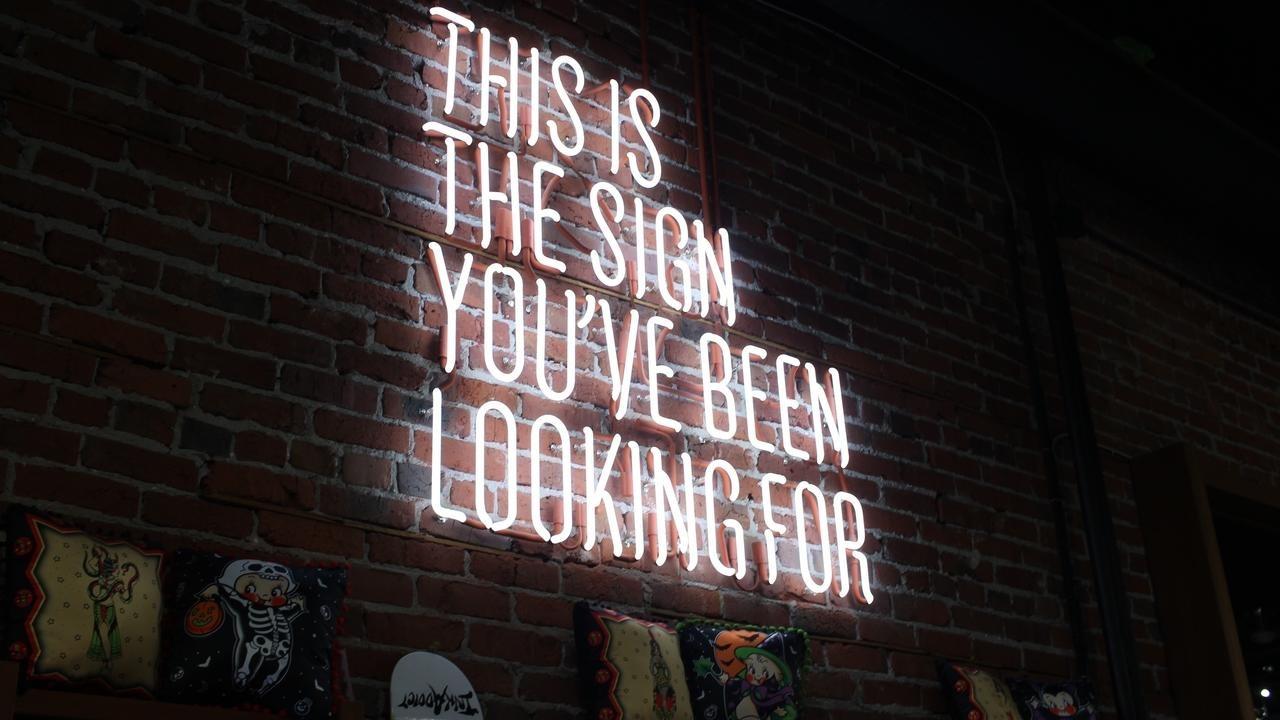 Every now and then we send out a newsletter on the exciting topic of midlife. Sign up below. You can unsubscribe any time.